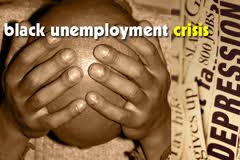 The talk in Washington has quickly turned from jobs to cut the deficit. The worse part is that most of the cuts will be to programs that help those in the lower income brackets. Basically congress looks to balance the budget on the backs of the poor and middle class.

Locally, the situation is just as bad as it on the national level. What makes Louisville's situation worse is that we were shedding jobs years before the recession started. The bad news is that it will take Louisville years to add jobs at the rate of peer cities. Until that happens you can expect even more middle class African Americans from Louisville to leave and look for greener pastures elsewhere.

Read the whole article about black unemployment. It's a very good read.
Posted by Haven Harrington III at 9:10 AM No comments:

According to the C-J a new report to be released later today says that downtown Louisville added jobs faster most of our peer cities. Using various data the researches show that Louisville's downtown worker grew by almost 12% from 2002-2009. That was the largest increase compared to all of our peer cities. Not to shabby.

However, downtown Louisville didn't fair as well when it came to housing, retail, and the number of fortune 500 companies in the center of the city. We ranked last when it came to homeownership rates and our median household income was only $14,733, and we all know about downtown Louisville's extreme lack of any retail. All in all the report pretty much reaffirms what most us already new, except maybe the number of jobs we added to downtown.

In the article in the C-J it was good to see Mayor Fischer talk about the need to attract more local retail businesses to downtown Louisville, especially the block south of Fourth Street Live. The city said that it will use the report to help attract more retail downtown and help develop market rate housing.

I wish the C-J had linked to the full report so I could have read it for myself, but from reading the article I do have a couple of thoughts. My first thought centers around downtown retail. I notice the article didn't mention any future projects. What ever happened to the Center City Project by the Coordish Group? Wasn't this suppose to be a great retail/housing development?

I do like the focus on more market rate housing in downtown Louisville. Louisville doesn't have a wealthy enough population to sustain the typical condo/tower model. If we can get more affordable condos and apartments in the center city I think we would see a lot more people moving back downtown. Louisville could also mask the lack of housing downtown by investing more in the neighborhoods that surround town.

I wish I could have a more detail critique of the report, but without reading it for myself that will just have to wait.
Posted by Haven Harrington III at 9:17 AM No comments: 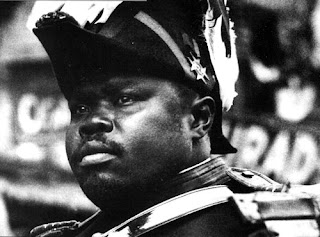 "Chance has never yet satisfied the hope of a suffering people"
Marcus Garvey
This weekend I watched parts of MSNBC's  'A Stronger America: The Black Agenda' and I started to think to myself what is Louisville's black agenda? Do we have one, and if we do what is it? As far as I can tell we don't. What we have in Urban Louisville is chance and hope.
There is chance that when the Louisville economy turns around that it will also lift black Louisville. There is a chance the state government will increase its investment in the states urban areas and thereby increase investment in black Louisville.
We hope crime will decrease and educational attainment increase when he pass an ordinance making youth pull their pants up.  We hope that getting a new school superintended will spur academic achievement in our youth.
That's what we have in Louisville. Chance and hope. We need more than that. Our people are suffering and yet there is no relief in sight. The good news is that we have been here before and we found our way out. We decided as a people in the early 1900's that we would improve our lot in life and we did it. We built very prosperous business districts, we built our own schools, libraries, civic institutions. Urban Louisville was even on the vanguard of the national Civil Rights Movement. We gave the NAACP it's first ever victory in front of the supreme court and thereby the foundation of Brown v. The Board of Education. Several of the national leaders of the NAACP and the Urban League came from Louisville. If we did it once we can do it again.
The only way we can right the ship is to develop a plan. We need an agenda that not only outlines what we want to achieve, but how we are going to achieve it. It has to address everything from education to zoning laws. It has to be a living breathing document or documents that can change with the times. The agenda has to come from a bottom up perspective. We have to focus on those that have been left behind and include them in the conversation. Finally, we have to create financially independent institutions that can push the agenda forward. I think there are enough motivated and bright people in Louisville that we can make it a reality. The question is will we?
Posted by Haven Harrington III at 9:33 AM No comments: