Why Downtown is Dying 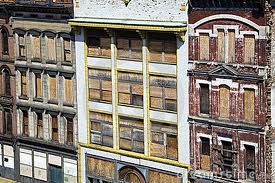 Downtown Louisville is dying. Actually, it has been dying since the 1950's. The growth of suburbs after WWII drawing people out of the center core hurt. The city's decision to suburbanize its urban core by tearing down buildings to build surface parking lots didn't help either. Don't get me wrong. There have been some very successful efforts to try and save downtown. Slugger Field, Waterfront Park (which will be covered up by the Bridges Project), West Main street museum district, and 4th Street Live to name a few. On that list only 4th Street Live could be considered a question mark. These are great projects and there are some others on the way, but in the end they will fail to resurrect downtown.

Before urban renewal downtown was connected to its surrounding neighborhoods. After urban renewal it is completely disconnected and it's now its own separate entity. On the west side of central business district you have the 9th street divide. On the east side there is I-65.

I'm not saying that this is the only reason downtown is dying. There are a ton more reasons, but I think this is the biggest. If Old Walnut street and east Russell had not succumb to the wrecking ball would downtown be in as bad of a shape?  Over 3,000 single family homes and businesses were torn down and replaced by surface parking lots and subsidized housing. The destruction was so complete that there is not 1 single family home left from 5th Street to 16th street in Russell. Same thing happened to east Portland. How much potential economic activity was lost?

We need to stop thinking about downtown Louisville as just the central business district. It should be much more than that. We need to make reconnecting downtown to its surrounding neighborhoods a priority. We need to work on reconnecting and revitalizing those old business corridors (Market St, Broadway, Main St, and Preston) so they can once again funnel people downtown. We need to visually and physically reconnected these neighborhoods back to downtown.