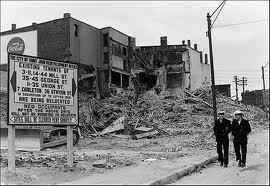 Last Night at the Louisville Metro Dems meeting Mayor Fischer said that the biggest obstacle to economic development in West Louisville was the accumulation of large parcels of land. The old American Tabacco factory site at 30th and Ali was held up as a great example of this. This also fits in with metro government's push to demolish as many vacant homes as possible. This isn't the first time that I've heard that rationale or that particular line of thinking before. I have spoken with many GLI officials over the years and they talked about how West Louisville would be perfect for warehouses and light industrial development. Not one time was it ever mentioned that West Louisville could be a great place for small scale retail or the type of businesses you see along Bardstown Road and East Market.  Metro government only sees West Louisville as great place for warehousing. Warehousing of goods and for warehousing the poor and undesirables.

Are we looking at Urban renewal 2.0? Hasn't West Louisville seen enough of the destructive power of the wrecking ball? West Louisville, especially black Louisville, has sacrificed enough to enrich the other parts of the city. The city destroyed our thriving business districts to build parking lots. Or to put it more bluntly to remove black folks from downtown. Urban Renewal was really just negro removal. Joshua Poe of the Leo wrote an article about how race was the prime motivating factor for urban renewal.


The intentions of the 1957 plan stated the demolition of black neighborhoods would “insulate and protect the tremendous values in the central business district against the run-down and blighted neighborhoods around it.” Thus urban renewal was never motivated by the well being of residents, but the economic health of downtown based upon the exclusion of blacks.
Is this "new" push to tear down homes and warehouses just more of the same and a continuation of urban renewal? Yes. Its a plan to create wealth for the small few while disenfranchising the masses of West Louisville residents. Do you think these warehouses will pay a decent wage that you can raise a family on? No. Will they add to the economic vitality of the community. No. What's going to happen is that a small cadre of developers will make a ton of money on tearing down warehouse and houses and then building new warehouses. The businesses that move into the warehouses will have an endless supply of cheap labor around their warehouses because West Louisville is where we warehouse the poor.

What happens to the residents? It would seem that nobody really cares. On the flip side. If we treated West Louisville like we did the Highlands or East Market how much better of a city would we have? How much better for the bottom line would be if citizens of West Louisville had the same buying power as the folks in Clifton? If Old Walnut Street had never been razed and the black community had the ability to accumulate wealth in West Louisville how much richer would Louisville be? Would the city even be looking at a deficit?

We can't keep going down the same path. It has to stop. We can't keep looking at vacant properties as problems but as opportunities.  We can't keep disenfranchising a whole section of the community to the  benefit a small few. We have to wake up.
Posted by Haven Harrington III at 9:55 AM 6 comments: