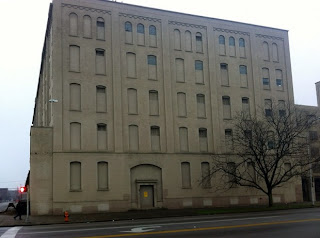 As some of you may know, I along with several other preservation groups, have been trying to save the old Phillip Morris warehouse on the corner of 18th and Broadway. Currently the YMCA of Greater Louisville wants to tear down the warehouse that stands 5 stories, is a block long, has more than 500,000+ square foot space, to build a 2.5 story Y that will include an aquatic center and UL healthcare and will have 70,000 sq. ft. of space and is a little over a block long.

I commend the Y for investing in west Louisville and bringing much needed services to a part of town that needs them. The Y deserves big kudos for that. But does the Y need to tear down such a large historic structure to build a much smaller Y?

Across 18th street there is a large vacant lot that will become a development known as NewBridge Crossing. According to InsiderLouisivlle.com there is a major big box retailer looking into moving into that site. If that happens I'm sure they will need most of the 19 acres that the site currently occupies. Why didn't Y choose to move across the street into the NewBridge Crossing development? According to various articles in the Courier-Journal. The original plans for NewBridge Crossing called for a lifestyle center (think an urban Summit) that included condos, UL pediatrics, and the YMCA. SO, if the YMCA was a part of the original plans for NewBridge Crossing what happened? I don't know, but I think that deserves some investigation.

What really got my attention were the plans for the old Phillip Morris warhouse in question. In those plans, TMG (developers of NewBridge Crossing) wanted to turn the warehouse into a Boutique Hotel, with condos and apartments. There is another newer warehouse on the site that faces 18th that was suppose to be a convention center. Call me crazy, but that is a much better use of the property than a YMCA.

The YMCA is a great project and much needed in west Louisville, just not at 18th and Broadway. This part of west Louisville already has a YMCA at 10th and Chestnut, and there is a great workout facility at St. Stephen's Baptist Church right off of 16th st.  A better place for the YMCA would be near Park Duvall, Shawnee, or the Chickasaw neighborhoods. Those areas are severally underserve. Not the Russell/California area.

The development plan presented by TMG is a much better fit for the area and is what this community truly needs. How many more jobs would the boutique hotel/convention provide rather than the Y? How many more spin off businesses would that kind of development spur as opposed to the Y? I know there are a lot of nay sayers that doubt a hotel can work in west Louisville. I understand your doubts. But you have to remember what is directly behind this warehouse. Brown-Forman. How many executives does Brown Forman fly in or host on a yearly basis? I'm sure they fly in hundreds of people. A hotel that is less than a block away from their corporate HQ would be a perfect fit.

This is they type of responsible urban development that Louisville needs. Which leads me to another question. What happened to this project? If TMG had plans for the property why did they fall through?

Posted by Haven Harrington III at 9:55 AM